Since leaving Fiji we have struggled with internet and will continue to do so while in Noumea:( So while we are anchored in a spot with reasonable reception I will try to update our adventures since leaving Fiji....
With no deadlines to meet or flight schedules to be in port for, we were able to pick the perfect weather window:) Winds in the right direction, seas big but NOT on the nose and wind speed just right for putting up the mainsail and jib and sailing - no motors:)
It looked like it was going to be a fast trip, averaging 9 knots, making the trip roughly 12 hours shorter - always a bonus in my view! The nights were spectacular! Clear, cloudless skies filled with the constellations of stars and our own Southern Cross to guide our way. I can see why Ron has always said I will love crossings:) I will never love them haha but I certainly loved those beautiful clear, starry nights:)
All keen fisherpeople on board, we were of course, towing lures behind the boat. Not having had particularly good luck in the past we were somewhat surprised to hear the star drag go off on 2 lines at once! Trub and I were only ones up so we turned the boat up into the wind and yelled, "Fish on!" Ron and Steve came running up and grabbed a line each and started reeling them in. Ron's line was coming up first so Steve got the gaff and they tried to land the fish - looked like a big yellowfin tuna - good eating! After a comedy of errors, the fish unfortunately went under the boat and managed to wrap around the prop:( Not good! Ron had to cut him off and let him go:( Back to the fish on the other line.... Steve and Ron reeled it in and it was a big skipjack tuna - not as good to eat but a good fish nonetheless:)
So we were on our way again... When under sail, we have to feather the props to stop them turning. It soon became apparent that the prop the fish went round had caused a problem and Ron had to do his thing and jam the prop with screwdrivers and vice grips! We dropped the main and turned the starboard motor on for the next 10 hours, averaging 4.5knots. In the morning when the seas had calmed and there was no wind, Ron went over the side with the hubba bubba line connected to the air tank to cut the line round the props. All good! We were underway again, both motors at 1800RPMs to try to make up some lost time:)
I had requested permission to clear in at Port Resolution, Tanna Island, Vanuatu. It is the best anchorage on the island but not the official clearance port. We dropped anchor at 9.00 Thursday morning, 70 hours.
My impressions of Tanna are; a very pretty island with spectacular rock formations, crystal clear water and white sandy beaches all around the coastline. Port Resolution was a harbour of sorts but  essentially a horseshoe that opened straight out to the ocean, too shallow to anchor around the inside curves of the headland. A steady ocean swell rolled in but not too uncomfortable:)
The most unusual sight was the abundance of fishermen in dugout canoes just sitting on the water in the bay. Some loud voices would start whooping and all the fishermen would start paddling madly and put out their nets. We learned later that spotters on the hill could see the fish bubbling and would yell to the fishermen where to go! The system worked well:)
Customs and Immigration drove an hour over a dusty, gravel road to clear us in and we decided to give them our skippy tuna:)
Port Resolution is at the base of the volcano so we were fascinated by the bubbling rock pools and spouting geysers from the cliffs below the mountain. We went for a walk up to the 'yacht club' and a wander around the village. A very pleasant experience:)
It was Independence Day in Vanuatu so the whole island was celebrating. We needed to reprovision and hoped to get up to see the volcano so after a couple of lovely days at Port Resolution we headed around to the other side of the island, Lenakel. The winds have to be right to anchor at Lenakel as it is virtually right on the coast with poor holding and huge swells coming over a reef but the conditions were good enough for us to stay until we could clear out on Tuesday. The local markets were open for fruit and veges and we had enough meat to get across to Noumea so we stocked up and relaxed taking in the colours, voices and views of Lenakel:)
While ashore I asked a local driver if he could take us up to the volcano. He agreed for a price so Ron and I went up that evening while Steve and Trub stayed with the boat:) They had been twice before.
What an absolutely, mind blowing, once in a lifetime experience! It was the main reason we went to Tanna instead of going straight to Noumea and I am SO glad we were able to see it! The drive over the ash covered base of the mountain felt like I imagine driving on the moon would be like! And the volcano..... Unbelievable! We literally walked up the side of the crater like mountain goats and stood on the edge as the ground rumbled and shook and lava spewed out sending showers up into the air! No fences, no viewing platforms from a safe distance! Right on the edge! I will remember that for the rest of my life! 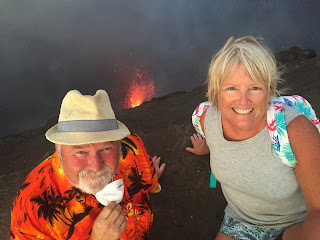 Sickening!! Here it just rains every day and you can't do jack shite. And the fish costs $40/kg and it stinks. New hat Ronnie? Matches the goatie. And I hope your shirt is not on fire. And of course this is good for my darling sis... look at her.
God's angel. Nice one guys. Keep em coming. Make us sick