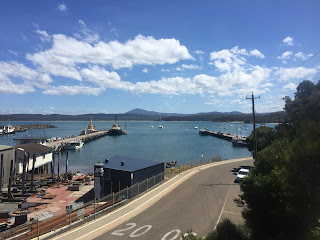 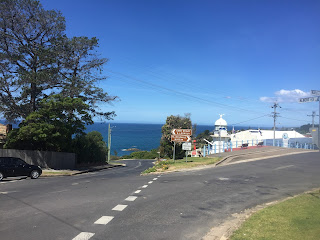 When researching anchorages and approaches to Tasmania I had unfortunately read far too many reports about the "mythical" Bass Strait and was filled with trepidation. It required 36 hours sailing for a start with just Ron and me which was the longest we had done by ourselves.
I am happy to say I have done it but am not in a huge hurry to repeat the experience haha! The wind was at 90 degrees to the boat and was around 30 knots so difficult to keep on course without tacking. To keep the sail at an angle to maintain wind we were heading out to sea. To get back on course we were punching in to the seas with the wind on our nose getting nowhere. The wind was meant to shift around to the North which would have been perfect but it really didn't come until too late. In the end we just had to punch into it for a few hours to get in before nightfall.
Our first anchorage in Tasmania was at Lady Barron, Flinders Island. It required crossing a sandbar. The wind being so strong and the water so shallow caused steep short waves and once again we were punching into it. Ron was getting frustrated but I could see the light at the end of the tunnel!
There were 2 courtesy moorings available but for a boat with a maximum length of 14m so we didn't feel we could go on the mooring, particularly since the wind and current was so strong. Gusting 50 knots! This left tying up to the wharf as our only option. We were pretty sure our anchor wouldn't hold and we were in for a 3 day storm:(
We were both pretty tired by this point but the next hour was one of the scariest hours of my life! The wharf where we were tying up was L shaped with the short end going across the bow and the length of the boat alongside. There was a massive current pushing against the side of the wharf and waves under the boat that were high enough to smack the wing deck!
With just the 2 of us, Ron nudged the boat in, with me at the bow with a rope ready to throw over the pole and a fender in case we were going to hit.  Fortunately, we had put all the fenders down as the stern was pushed in against the wharf by the current and the wind and one fender took all the weight!  The bow was coming in fast to the jetty and the motors were not strong enough against the wind and the current.  The bowsprit held us off and I slung a rope over as fast as I could.  It took a couple of hours in the freezing cold to get tied up and after the endless rush of adrenaline I was absolutely exhausted!
No rest for the wicked though!  We were up again at 4.00am, in hailstorms, to try to get a rope to a second jetty to hold us off the wharf.  The fenders could not keep up with the wind, current and rise and fall of the tide.  Ron, being the Kiwi bloke that he is, cast a fishing line from the second jetty, weighted down with a shoe, attached a rope and reeled it in. Voila!  We had a rope holding us off.  He is truly amazing!
We were in Tasmania!
Posted by Annie at 15:41

That's a good fishy story for Ron to tell over a few apple juices in the years to come!!